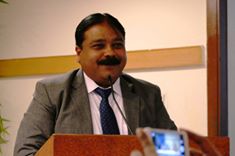 Dr. Anthony Raju , Advocate , Top Human Rights Activist of the India told an audience in a Global Peace Conference held at Hosur, Tamilnadu that governments around the world should be vocal, consistent, principled and transparent about human rights.

Dr. Raju was speaking at the opening of a Global Peace Conference in Hosur . He was a headline speaker at the annual event with other speakers.

"The first piece of advice I would have from my experience is that governments need to be vocal about human rights," He said.

He said whole world is facing "an unprecedented human rights crisis." He urged that criticism of ruling systems be met with dialogue, not prison terms, and that protests be met with "crowd control," not bullets.

"My advice to you is not only to be vocal and consistent, but also to be principled in communications about human rights. The fourth suggestion I have is to be quick," He said. "Governments must be prepared to be transparent and get their message out first."

Dr Raju mentioned countries such as Sudan, Iran and North Korea in her 12-minute speech, however He made no specific references to rights abuses in Gulf Arab countries or the humanitarian toll of the Saudi-led military intervention in Yemen, which the UAE is taking part in.